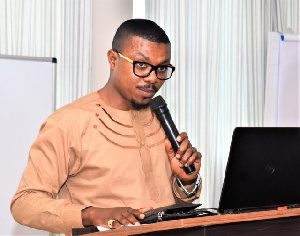 Scores of residents in the Kwesimintsim Constituency in the Western Region who had the chance of being part of a two-day ‘Constituency Surgery’ at the behest of their Member of Parliament, Dr. Prince Hamid Armah, say they have been vindicated in their choice of him and the New Patriotic Party in the 2020 December general elections.According to them, Dr. Prince Armah has demonstrated that he will perhaps be one of the most engaging Members of Parliament Kwesimintsim will produce.As part of a series of programmes to make himself accessible to his constituents, Dr. Hamid Armah initiated the ‘Constituency Surgery’ to have a one-on-one interaction with his constituents in his office at Kwesimintsim.The two-day ‘Constituency Surgery’ saw market women, businessmen, students and unemployed graduates, artisans and others, without any consideration to their political persuasion, coming for a session with the MP.“When I heard of this programme, I was not too sure about it because this has never happened before and so I was a bit sceptical but I tried all the same,” Martha, an unemployed graduate told 3news.com after leaving the office.“I called that I wanted to see my MP. Few hours later I received a call from the office of the MP that I have been scheduled to come meet him. I came on the scheduled date, met Dr. Prince Armah in his office. I spent about 20 minutes and I must say it was refreshing and educative at the same time. His calmness and the genuineness with which he engaged me, I have no doubt in my mind that he means well for Kwesimintsim.”She continued: “When I came I told him I wanted a job. That was my only reason. But in my interaction with him, I realized that there are so many things I can do on my own without necessarily waiting for a formalized work. I will explore the ideas he gave me and I’m hopeful something positive will come out of one”.A group of traders at the Abenbobom Market without any scheduled appointment said they were at the MP’s office to discuss how the “dying market could be revived”.“The problem at the market is an age-long one. We have had a challenge with creating the necessary buzz around the market to attract people to patronize it. It is a pity that some people will take a car to Takoradi Market Circle for the same things we have here. There are other infrastructure challenges as well. We engaged our MP and already he had some plans on how to help. He even went on to show us some business strategies that were so easy but we had not even thought of them,” one of the market women said.Kojo Mensah, the young man who in June 2019 memorably charged into the parliamentary chamber wailing that he wanted to see his MP, was also among those who met and interacted with the Kwesimintsim MP.He had one of his arms wrapped in a bandage with a big brown envelope tucked under his armpit. He recounted that the incident in Parliament still weighs heavily on him.“So I asked myself whether anything will change with Dr. Prince Armah. Currently, I have a challenge with one of my arms. I will require a surgery. I have interacted with him. I’m hoping he will be able to use his wide network to help me. I’m counting on it.”A businessman who also came for a cover letter said “after I’ve told the MP about what I wanted, in my presence he called someone connected to my issue and had a discussion there and then. All I have to do now is to follow up. This is commendable and I pray he sustains this initiative”.In all, some 60 constituents benefited from the ‘Constituency Surgery’.Dr. Prince Armah said he plans to have more of such engagements with constituents, including town hall meetings, in order to provide what he described as “truly responsive and representative leadership” to the people of Kwesimintsim.