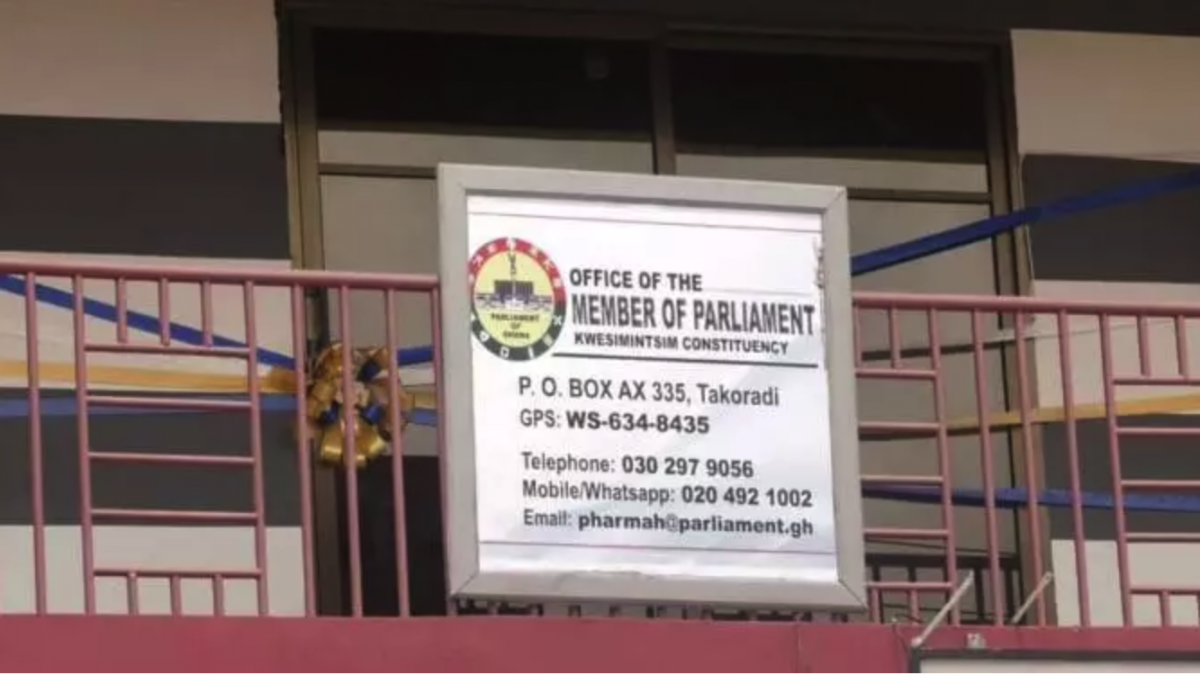 Member of Parliament for Kwesimintsim Constituency in the Western Region Dr. Prince Hamid Armah has stressed on the need for Members of Parliament (MPs) to build and maintain a strong working relationship with their respective Metropolitan, Municipal and District Assemblies (MMDAs).

He believes such relationship will only lead to an unbridled development that both the MP and the MMDA concerned so desire.

The office was one of the many promises he made in the run-up to the 2020 elections in his desire to have ears and eyes to the challenges in Kwesimintsim.

He joins a handful of MPs who have an office apart from the party’s constituency office in the Western Region.

The office is situated a few meters away from the under–construction municipal office for the newly created Effia Kwesimintsim Assembly.

He explained that the setting up of an office for the Member of Parliament is a demonstration that he is prepared to work and help address the concerns of all his constituents irrespective of their political persuasion.

“… I made a very strong case to the good people of Kwesimintsim that having listened to their concerns and plights, it does appear to me that there is a lack of access to the Member of Parliament,” he said.

“That, there seems to be a blockade between the MP and the constituents. And part of the fundamental issue regarding this blockade has to do with the inability for people to assess the MP on issues concerning their community and individual welfare simply because the MP’s office is in Accra. So, the only way I can solve that was to create an office here in Kwesimintsim. That way, people can walk in, make enquiries, leave letters so that I can be properly informed of the concerns of the people”.

Dr. Prince Armah explained the choice of location is strategic as it will promote effective communication and smooth collaboration between the him and the Municipal Assembly.

“When you go to the Municipal Assembly with an issue, there may be lack of understanding. You will probably think that it is the Municipal Assembly who is supposed to handle it, so you go there and they tell you that the issue is beyond them. You have to contact your MP. All you have to do is to just cross the street and come to the MP’s office. In the same way, when you go to the office of the MP first and the issue relates to the office of the assembly, we will advise you and where possible I will minute on the letter or document for the appropriate officer at the assembly to act on it. Here too, you will not be worried with long distance or taking a car. Once you cross the street, the office of the assembly is there.”

He explained that the setting up of an office for the Member of Parliament is a demonstration that he is prepared to work and help address the concerns of all his constituents irrespective of their political persuasion.

“Once you become the Member of Parliament you are a public figure, you are a public officer serving the public. So, you must have an open-door approach to take on and address challenges in the constituency. You must also recognize that some people, if you talking about political affiliation, is very unlikely that they will have an MP so how do we deal with such people.”